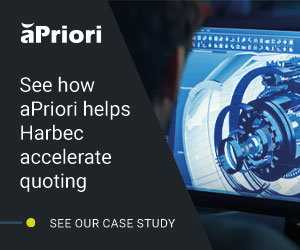 The power of modern design software and production machinery have manufacturers exploring the limits of what’s possible. While ambitious and necessary for progress, when the two sides struggle to meet in the middle, problems arise: you can draw pretty much anything you want, but that doesn’t necessarily make it something that can be manufactured efficiently, or at all, for that matter. The extraordinarily expensive F-35 Joint Strike Fighter program that’s bubbled up in America’s political discourse is a famous example of this. The F-35 is experiencing significant delays and cost overruns due, in large part, to design and manufacturing disconnects. It represents a large-scale example of ambitious projects that are forcing manufacturers to find creative ways use every tool in their proverbial toolbox.

For instance, with the proliferation of multi-axis machinery, it was thought that an add-on accessory like an angle head would be rendered obsolete. But we’re finding quite the opposite to be true. We’re seeing as much interest as we ever have in this accessory, and today’s vigorous push and pull between design and manufacturing is likely a big reason. Let’s look a little deeper into this example. Just how, in this day and age, could an inexpensive, relatively simple-to-integrate and inexpensive accessory like an angle head possibly assist in finding the delicate balance between design and production needed to deliver profitably?

Adding an additional axis to existing equipment. I know an aerospace customer that commonly makes a part with a flange that tips backwards, or down slightly. No matter how they position their massive five-axis machining center, or how they locate the part on the table, they could never line up the spindle properly to machine the slot feature in the flange. By using an angle head, they were able to add one more axis to the interior equipment to make a cut with the tool that they wouldn’t be able to otherwise. Another common application of angle heads that takes advantage of the extra axis is the use of slitting saws. Replacing small end mills with a slitting saw to produce parts like aluminum heatsinks, which have a lot of deep slots, can save a shop some serious time. By performing a run or two with a multi-tooth slitting saw, instead of using several light-cutting passes with an end mill, the operation can be done 20 times to 30 times faster.

The ability to use shorter tools. Think for a minute about affixing the tail or wing of a plane to the main fuselage. In the case of one customer, lugs must be positioned on the body of a plane before being finished – a good example of a quirk in the design and manufacturing relationship. In this scenario, to a straight spindle to the bores, the tool would have to stick out 6 ft to 8 ft, which is not viable. In fact, prior to moving to an angle head, the shop had to do this part offline on a different machine, then move it over for precise mounting on the plane’s body, all of which took a considerable amount of time.

Eliminating multiple setups. Another example from that same customer involves a half-ton part machined on a vertical turret lathe that required a scallop. Without an angle head, the shop would have to crane the part across the facility to another piece of equipment; in fact, you could be talking hours to get it into position. While moving large parts certainly involves cost, the same can be true for small parts: consider a job with four parts on a tombstone in a horizontal machine; the time consumed to take each part off the machine, put it on a cart, take it to over to the next machine and re-fixture adds minutes to every part, instead of performing all of the work at one center.

Eliminate unnecessary equipment. Anything with a rotating shaft and a housing, where something on the outside needs to turn with the internal shaft, typically has a key that requires slots. This configuration presents the challenge of making a rectangular form inside a round hole. Common in energy and construction power-generation equipment, this operation used to be performed by a process called broaching that requires specialized machinery. But by adding an axis to a machine with an angle head, the part doesn’t need to be moved to get the extra axis or special process.

Access to complex internal features. Picture an enclosed cylinder that is cut in half horizontally, with no opening at either end. What if one of the end of the cylinder needs a round feature, which is common in steerable drill heads? With no access from the other end, the only viable option for boring is an angle head that accesses the cylinder through the slot that runs the length of the part. As designers look to build in more and more angular movement for parts like these used in the oil industry, manufacturing engineers are forced to find creative ways to make it happen. Often an angle head is the only option.

The value of angle heads is magnified by the fact that they are available at almost any angle, fixed or adjustable, for use in high volume production or prototyping. They’re also easy to integrate. While highly specialized applications can take longer, most simple machines that are ready to accept a stop block can be up and running in less than half an hour. Keeping pace with modern manufacturing demands often means bridging the gap between design and production. While challenging at times, it doesn’t necessarily require capital investment. Rather, creative and resourceful applications of tooling and accessories, like angle heads, can get complex parts out the door without design edits snowballing to the point of loss.